Kurdish Jews (Hebrew:................; Yehudei Kurdistan Kurdish: Kurdên Cihû) are the ancient Jewish communities inhabiting Kurdistan. Their clothing and culture is similar to neighbouring Muslim Kurds. Until their immigration to Israel in the 1940s and early 1950s, the Jews of Kurdistan lived as closed ethnic communities. History There are old bonds between Jews and Kurds. Tradition holds that Jews first arrived in the area of modern Kurdistan after the Assyrian conquest of the Kingdom of Israel during the 8th century BC; they were subsequently relocated to the Assyrian capital. During the first century BC, the royal house of Adiabene, whose capital was Arbil (Aramaic: Arbala; Kurdish: Hewlêr), was converted to Judaism. King Monobazes, his queen Helena, and his son and successor Izates are recorded as the first proselytes. According to the memoirs of Benjamin of Tudela and Pethahiah of Regensburg, there were about 100 Jewish settlements and substantial Jewish population in Kurdistan in 12th century. Benjamin of Tudela also gives the account of David Alroi, the messianic leader from central Kurdistan, who rebelled against the king of Persia and had plans to lead the Jews back to Jerusalem. These travellers also report of well-established and wealthy Jewish communities in Mosul, which was the commercial and spiritual center of Kurdistan. Many Jews fearful of approaching crusaders, had fled from Syria and Palestine to Babylonia and Kurdistan. The Jews of Mosul enjoyed some degree of autonomy over managing their own community. Tanna'it Asenath Barzani, who lived in Mosul from 1590 to 1670, was the daughter of Rabbi Samuel Barzani of Kurdistan. She later married Jacob Mizrahi Rabbi of Amadiyah (in Iraqi Kurdistan) who lectured at a yeshiva. She was famous for her knowledge of the Torah, Talmud, Kabbalah and Jewish law. After the early death of her husband, she became the head of the yeshiva at Amadiyah, and eventually was recognized as the chief instructor of Torah in Kurdistan. She was called tanna'it (female Talmudic scholar), practiced mysticism, and was reputed to have known the secret names of God. Asenath is also well known for her poetry and excellent command of the Hebrew language. She wrote a long poem of lament and petition in the traditional rhymed metrical form. Her poems are among the few examples of the early modern Hebrew texts written by women. Among the most important Jewish shrines in Kurdistan are the tombs of Biblical prophets, such as that of Nahum in Alikush, Jonah in Nabi Yunis (ancient Nineveh), and Daniel in Kirkuk. There are also several caves supposedly visited by Elijah. All are venerated by Jews today. Kurdish Jews have also been active in the Zionist movement. One of the most famous members of Lehi (Freedom Fighters of Israel) was Moshe Barazani, whose family immigrated from Iraqi Kurdistan and settled in Jerusalem in the late 1920s. Important in the preservation of their traditions and especially their language, Aramaic, after migration was the work of Yona Sabar. Recently, an important book came out, describing the interactions of the Jewish population in Kurdish towns and villages and their Muslim Kurdish neighbors and tribal masters, or chieftains (aghas) during the last few centuries and especially during the first half of the 20th century.

Letter to Menachem Begin Yehoshua Zamir Kibbutz Ein-Dor June 28, 1982 Mr. Menachem Begin Prime Minister of Israel Jerusalem Dear Sir, On Sunday, June 6, 1982, my son, Yaron, fell in battle at the Beaufort. I have not stopped crying since that day and my hand trembles as I hold my pen. In his diary, I found a poem he had written on October 16, 1978. These were its closing lines: That same small detail -- a world of hate  With those same people and a protest singer  Can rise up now and rebel  And to the world, `Enough Killing', can yell. Two days ago, our family gathered at my brother's kibbutz. His son-in-law was also killed in Lebanon, on June 23, 1982, during a Syrian artillery bombardment of the town of Alei. He left behind a wife who is pregnant and blessed with a baby boy less than nine months old. My brother's other son-in-law was crippled during the Six Day War. My brother's son is now serving in Lebanon as well and his wife's family lost two of its men in Israel's previous wars. My tears dried and my hand ceased trembling when I heard his children say to their mother: "We're next in line". When night comes I am plagued by anxiety, fearful that they shall come knocking on my door, bringing me more bitter news. Sixty members of my kibbutz are still in uniform and they are all part of my family. I came on Aliya from the United States in 1945, managing to enter Palestine as an illegal immigrant, as did many members of my kibbutz, the fourth North American kibbutz of the Hashomer Hatzair youth movement. Of the 70 people from my kibbutz who came on Aliya, more than 50 are still in the country, more than 40 of these on Ein-Dor. Not for one moment have I ever doubted that this is my country. Our Zionist and humanist education has brought forth splendid results. Here we reside in the lower Galilee, living peacefully with our Arab neighbors, and this is the way I have educated our children. So, what could I say to my neighbor when he came to express condolences over the death of my son, Yaron, while members of his family were being shelled in Sidon, Lebanon? What could I tell Yaron when he returned from putting down demonstrations of Druse Arab residing on the Golan Heights who were refusing to accept Israeli identity cards [Israel annexed the Golan Heights in December 1981, thus imposing citizenship on all its residents who before 1967 had lived under Syrian rule]? And how could I look him in the eyes when Israeli soldiers in the occupied territories were shooting at women and children? Does the mightiest army in the Middle East really have no other methods for dealing with these children? The ground on which I stood is beginning to give way. Are we fated to live by the sword, a sword which has been sullied by the blood of babies? Is it not the hour to cease shooting and start talking? I do not ignore the fact that the leaders of the PLO are greatly to blame. The blackest day of my life since the Nazi atrocities was May 15, 1974, when they murdered innocent children in the Israeli town of Ma'alot. But we can seek and find partners for dialogue as we found in Egypt. We returned the Sinai to Egypt. Why could we not arrive at a fair compromise with the Palestinian people as well? On the evening of Monday, June 7, 1982, I was deeply hurt when you and Sharon appeared on the Beaufort, all smiles, and, with the blood of our fallen sons not yet dry, you turned to him and remarked, "How fresh the mountain air atop this fortress"... You cannot bring back my son, Yaron. But do not add further bereavement, pain, and suffering. Let the bombing of civilian-populated areas cease. Do not use spears and the bodies of our sons to try to dictate who shall rule in Lebanon. I reiterate the words of my son, Yaron: "Enough Killing!" You have renounced your vow of, "No more wars!". It behooves you to give back your Nobel Peace Prize. In pain and sorrow -- and with a hope that there shall be no more war. Yehoshua Zamir *****   Yehoshua Zamir is one of the initiators of MidEast Web. Yehoshua lost his son Yaron in the Lebanese war of 1982.  Yaron's diary has been published on the Web as his testament to peace. Yehoshua tells of his fight for peace and his experiences wherever and whenever he can (see Survival is Not Enough ).  Below, Yehoshua tells of a correspondence carried on with an unnamed Palestinian. Isn't it too bad that the correspondent must remain anonymous? [Yehoshua Zamir passed away in November 2002] 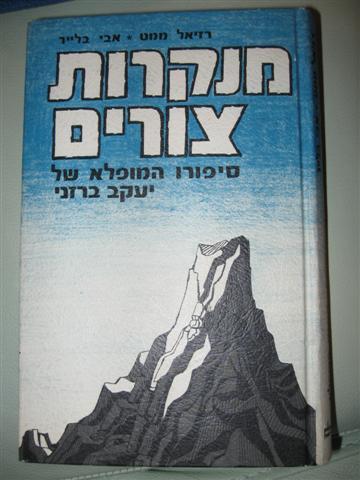 "From the Clefts of Rocks" the story of Yaakov Barzani 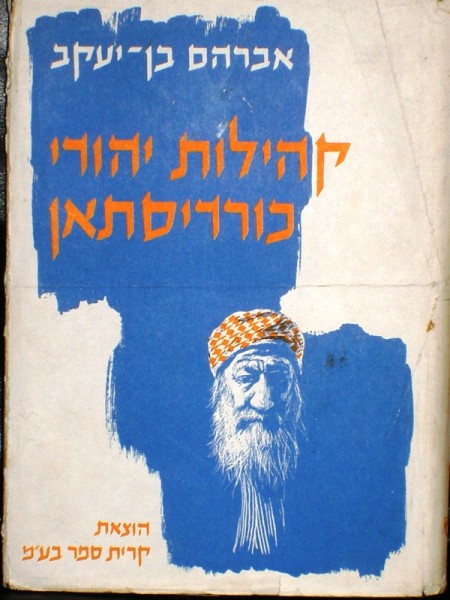 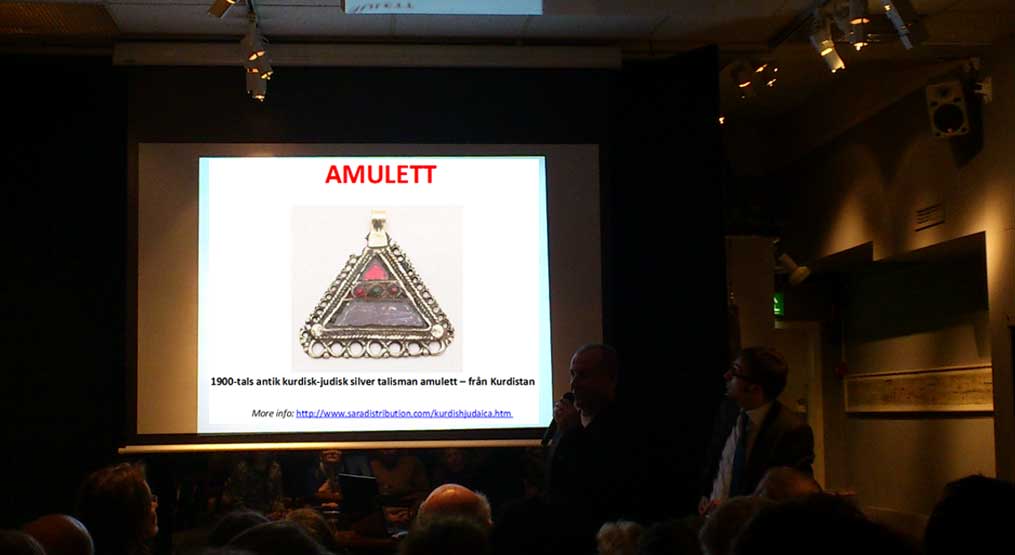 Presentation of Kurdish Judaica on Judiska Museet in Stockholm