The Narrative of an Engineer in Kurdistan, 1937

The English imperialists built paths to transport Kurdish oil to their energy-hungry industries.

He was born in Christchurch, New Zealand, the son of W. M. and J.S Hamilton. In 1924 he graduated from Canterbury College with a Bachelor of Engineering (Civil) degree. He married B.M. Hamilton, a medical doctor and they had six children. The second eldest of these was the evolutionary biologist W. D. Hamilton and one of his daughters Mary R. Bliss, achived some notability for designing mattresses.

in part of KURDISTAN (which is occupied by Iraq)

describes the work of a New Zealand engineer during the four years he spent in the mountains of Kurdistan in sole charge of large gangs of native workman whom he trained to do technical work. The upshot was the most exciting piece of roadmaking to date, the highway known as the Rowanduz Road streching from Northern Iraq to the Persian Plateu. During the war this road was used by the allies in the sending supplies to Russia. Many British soldier has driven up the hairpin bends and along the great Rowanduz Gorge and see the tops of the mountains where the young engineer in his spare moments hunted ibex or explored the Treasure Cave of the Ancient Kings, or passed the spot where Ismail Beg, young baron of Kurdistan, met an untimely death.

I had the privilege of meeting Mr Hamilton during operations in Kurdistan. Then, when that most unruly of all lands was in a state of violent ferment, when Kurds were fighting Arabs and Kurds were killing Kurds, when outside a fortified encampment or a village every man took his life in his hand and whent armed to the teeth, peace and order reigned along the road that Hamilton was building. His motley collection of Persian, Kurds, Assyrians and Arabs passed to and fro unarmed and unperturbed. His leadership, his personal skill, his sense of justice and his continual regard for the welfare of his-men had not only procured him the respect without which the work could not have proceeded.

The last two chapters need to be raad with discrimination, for Mr. Hamilton was living in close contact with the Assyrians and felt their misfortunes keenly. Actually there was not only an Assyrian side but a British side and an Iraqi side to this troublous question. We have, however, a clear responsibility towards these ancient allies of ours; and nowthat the Orontes scheme has fallen through, we cannot allow our consciense to rest until we shall have established them in a satisfactory home. H. Rowan-Robinson. 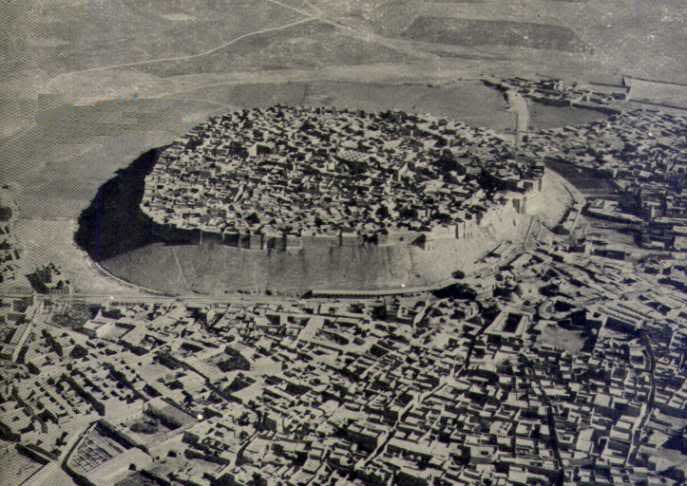 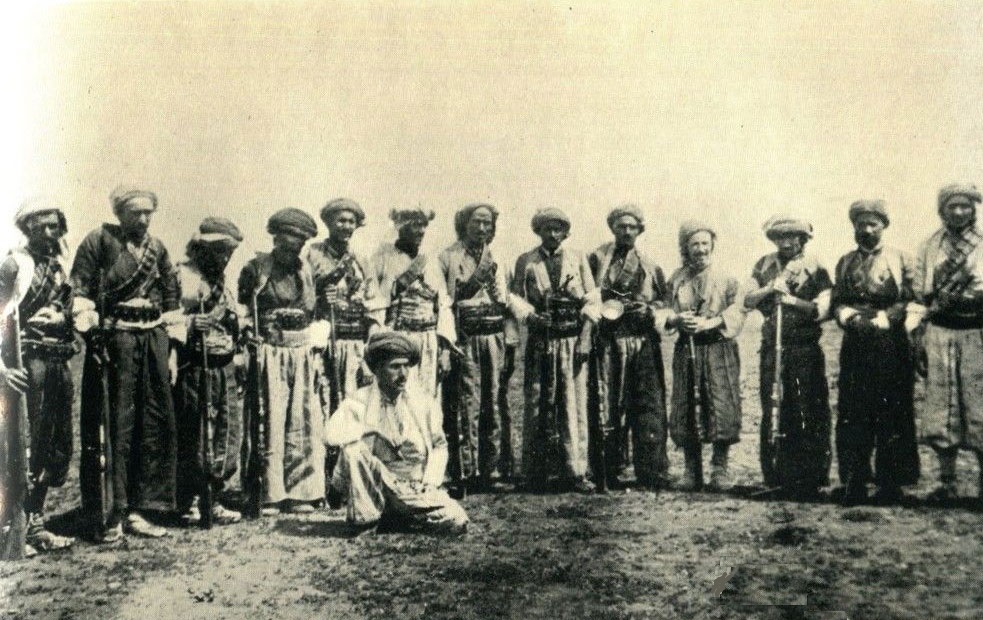 Ahmad of Barzani with his Cheiftains 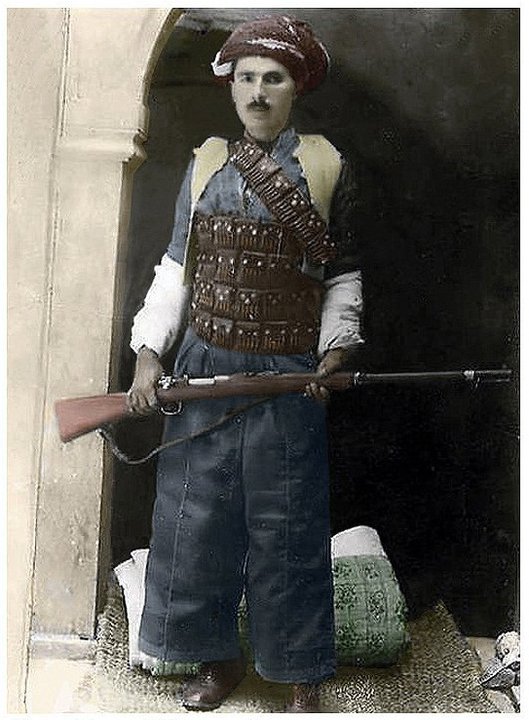 I. Land of Eternal Conflict
II. Diwaniyah
III. Northward to Mountains
IV. The Road
V. Camp on Spilik
VI. The Brigand, Hamada Chin
VII. Gali Au Beg
VIII. Forts on the Frontier
IX. Men of the Middle East
X. The Depths of the Canyon
XI. All in the Day's Work
XII. A Christmas Eve in Kurdistan
XIII. The Snows Melt
XIV. The Cave of Kospyspee
XV. The Treasure-Vault of the Ancient Kings
XVI. The Conquest of Gali Ali Beg
XVII. The Blood-Feud of Rowanduz
XVIII. The Fate of a Kurdish Cheiftain
XIX. The assyrians
XX. The Goal Attained 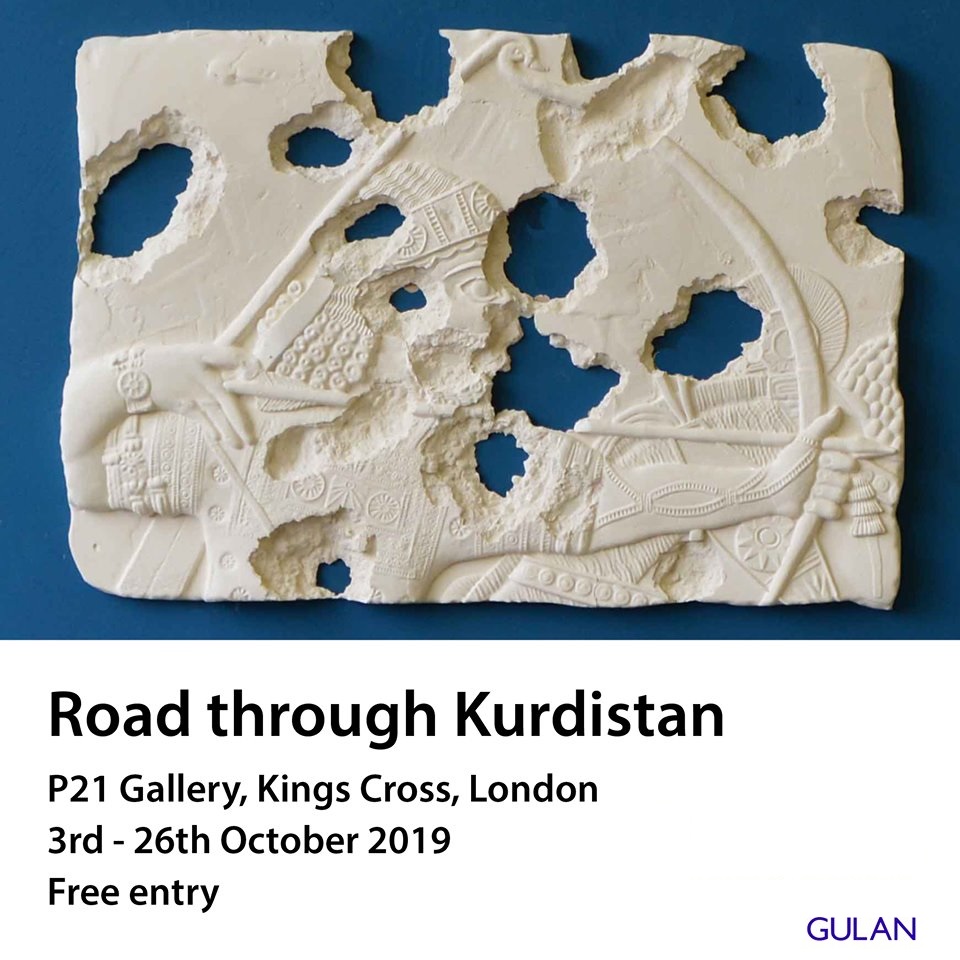 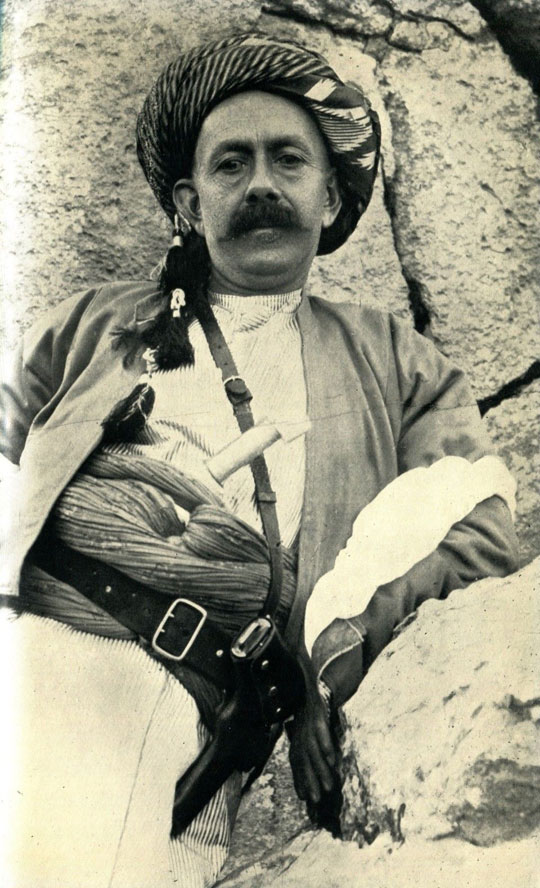 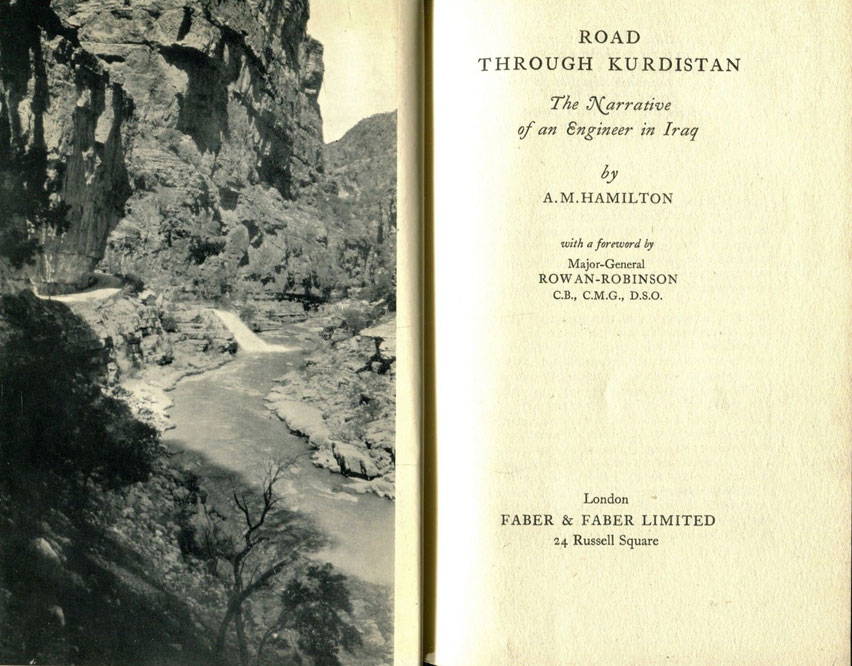 1. In the Rowanduz Gorge
2. Diwaniyah
3. The Blind Beggar on the Kirkuk Road
4. An Altun Keupri Fish
5. Hewler (Irbil)
6. A Kurdish Ploughman
7. The New Road up Spilik Pass
8. Spilil Pass Policeman, Guerges and Hassan Mulle Caravan transporting 'Juss' to Kani Rash
9. The Caravan Track in the Rowanduz Gorge
10. Rowanduz from the Air
11. Kurdish Villagers
12. The Alana Su joins the Rowanduz River
13. Berserini Gorge
14. Coolies taking their Midday rest, asleep on the Rock
15. Sayed Huesni Effendi (third from the right) and Shabanas of Shaikh Sayed Taha
16. Shaikh Mahmud
17. The old Berserini Bridge
18. Trewhella Winch Operators controlling bridge erection
19. Half-tunnelled Roadway in the Rowanduz Gorge
20. A Daring Air Photography of the Balkain Gorge
21. The Balkian Bridge
22. The Main Bridge
23. Shaikh Ahmad of Barzan with his Cheiftains
24. Assyrian Children
25. The Road near Rayat
26. The Town of Rowanduz 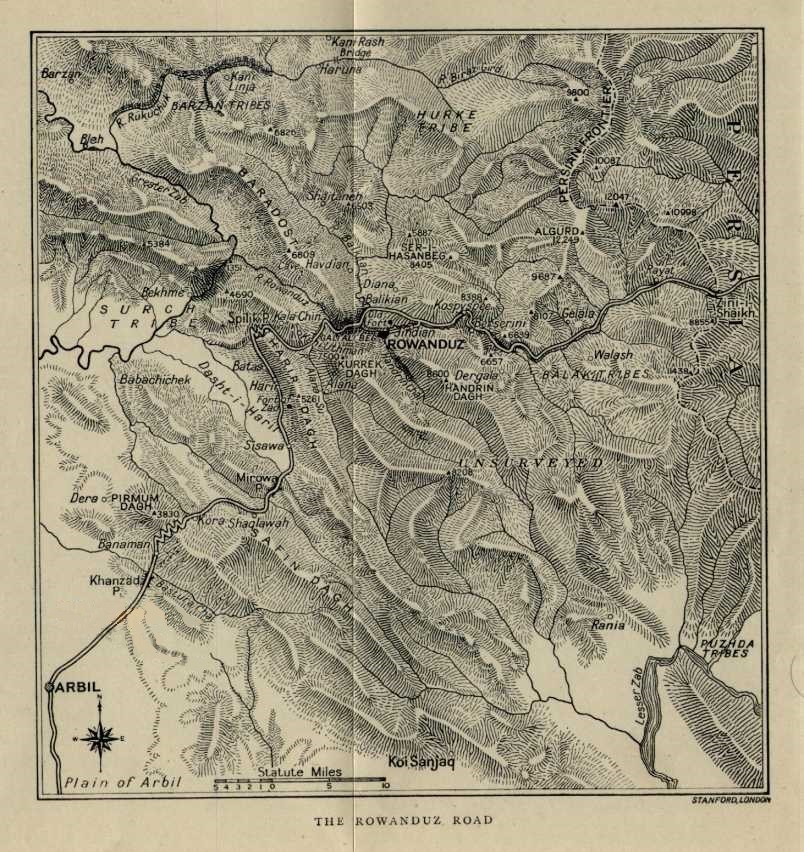 - Iraq and Road through Kurdistan
- The Rowanduz Road 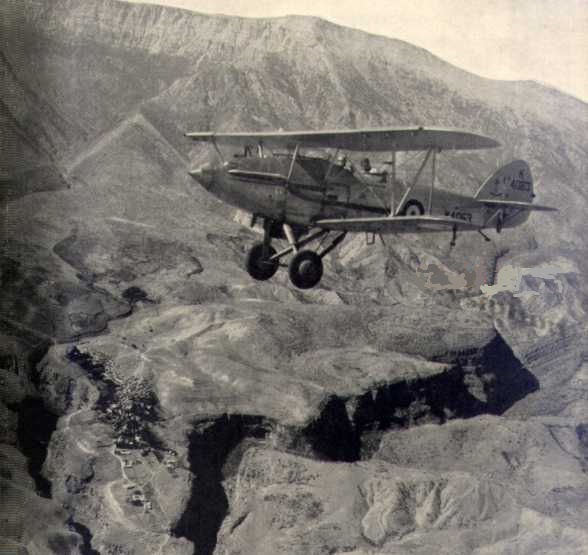 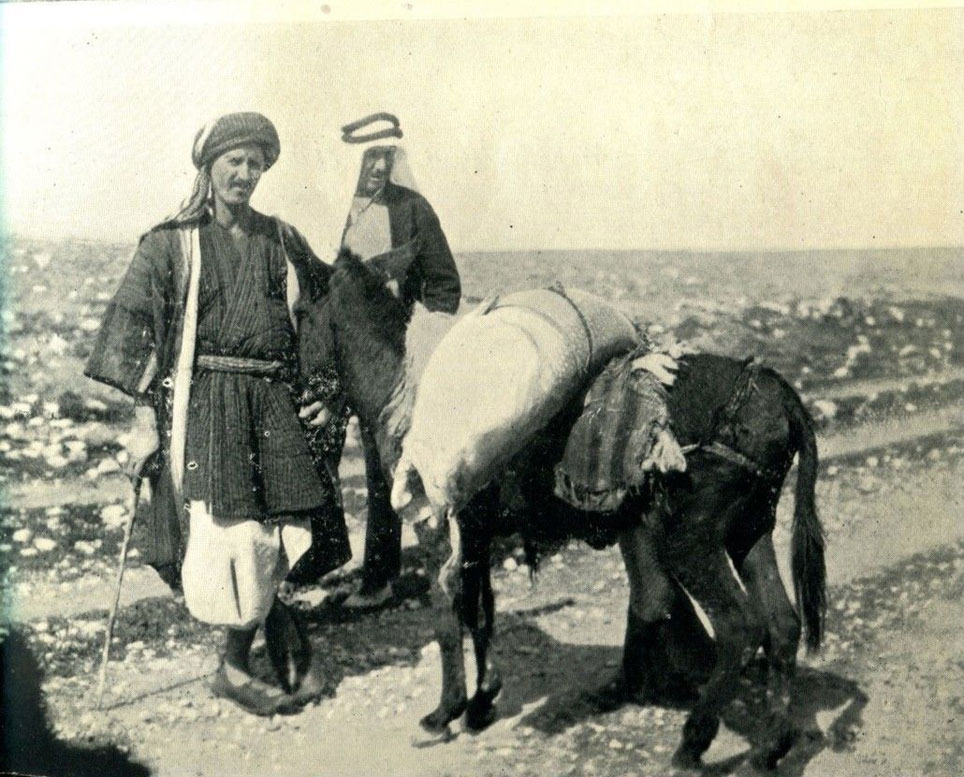 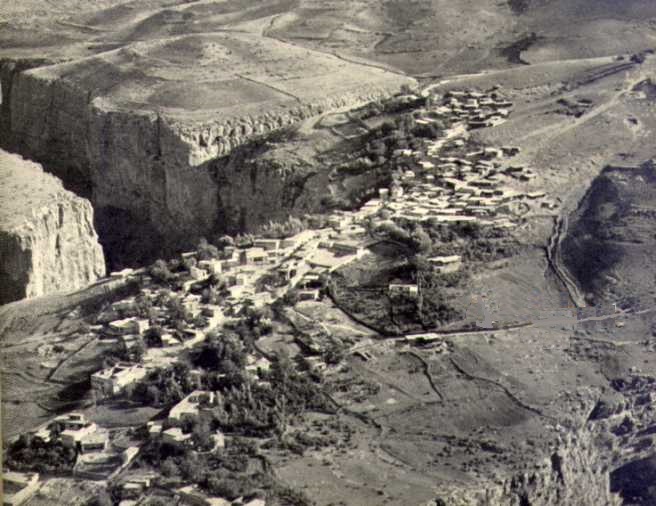 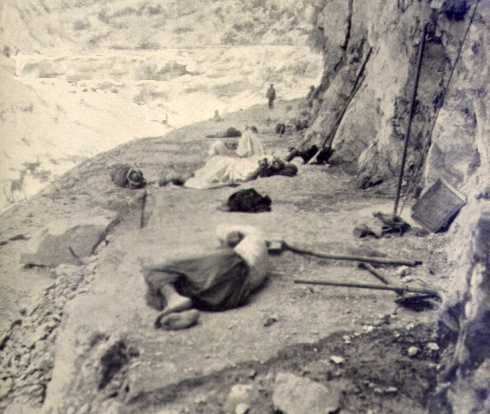 Coolies taking their Midday rest, asleep on the Rock 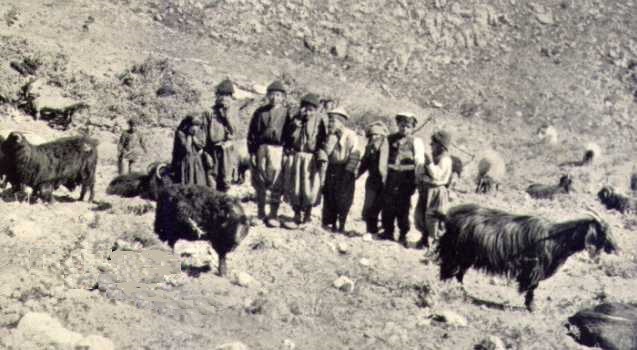 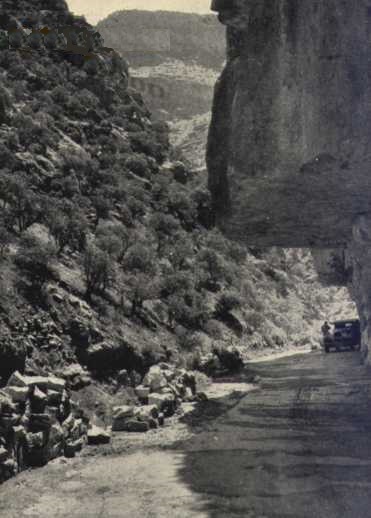 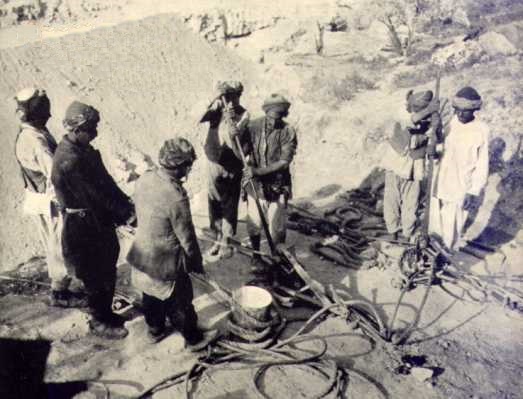 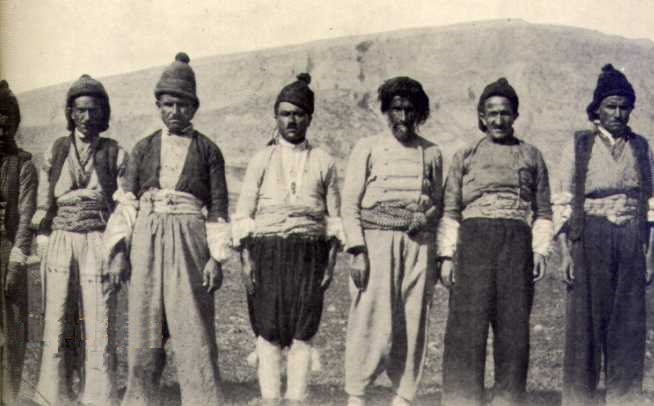 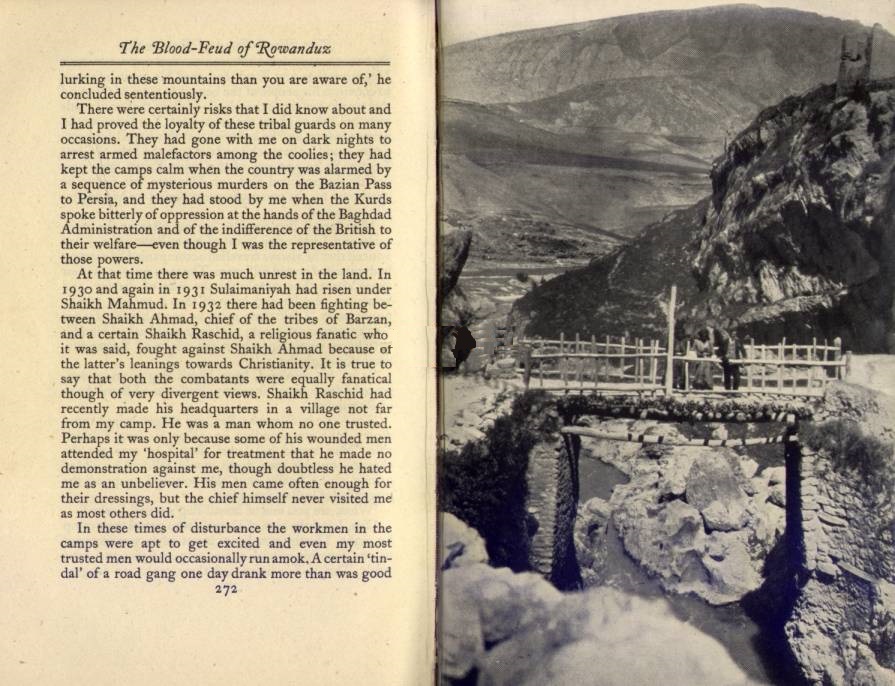 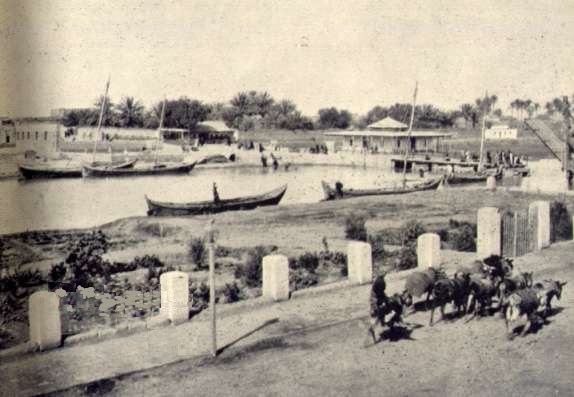