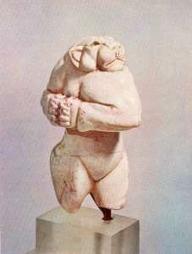 The Guennol Lioness was found at a site in Kurdistan for about 80 years ago and seems to be brought by British archaeologist Sir Leonard Woolley and brought in 1931 by Joseph Brummer, a New York art dealer. In 1948, he sold it to New Yorker Alastair Bradley Martin and his wife Edith. The couple - who have Welsh origins, called their estate Guennol - which is Welsh for Martin. For most of the time since the Martins bought the lioness, it has been on permanent loan to New York's Brooklyn Museum.

It was carved by a craftsman from Elam, the ancient Kurdistan. At Sotheby’s New York, the Guennol Lioness, sold for a remarkable $57.161.000, a record for any sculpture at auction.