THE AUTHOR'S AUTOBIOGRAPHY FROM 1928-1933 - LETTERS FROM BAGHDAD

THE AUTHOR'S AUTOBIOGRAPHY FROM 1928-1933 - LETTERS FROM BAGHDAD

Freya Madeline Stark was born in Paris, where her parents were studying art. Her mother, Flora, was an Italian of Polish/German descent; her father, Robert, an English painter from Devon.

In her lifetime she was famous for her experiences in the Nearer Eastern, her writing and hercartography. Freya Stark was not only one of the first Western women to travel through theArabian deserts (Hadhramaut), she often travelled solo into areas where few Europeans, let alone women, had ever been. 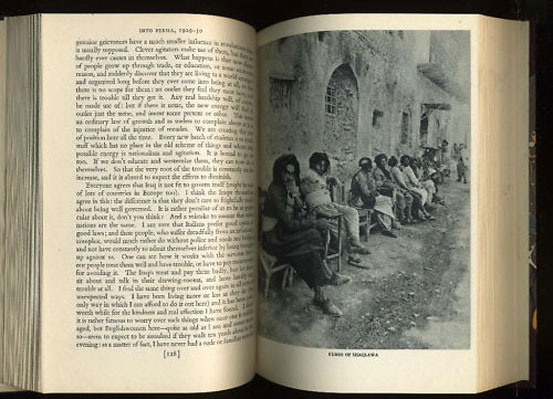 She spent much of her childhood in North Italy, helped by the fact that Pen Browning, a friend of her father, had bought three houses in Asolo. Her maternal grandmother lived in Genoa. For her 9th birthday she received a copy of the One Thousand and One Nights, and became fascinated with the Orient. She was often ill while young, and confined to the house, so found an outlet in reading. She delighted in reading French, in particular Dumas, and taught herself Latin. When she was 13 she had an accident in a factory in Italy, when her hair got caught in a machine, and she had to spend four months getting skin grafts in hospital, which left her face slightly disfigured.

The author Freya Stark among Herki clan members in Kurdistan

She later learned Arabic and Persian, studied history in London and during World War I worked as a nurse in Italy, where her mother had remained and taken a share in a business. Her sister, Vera, married the co-owner. In November 1927 she visited Asolo for the first time in years, and later that month boarded a ship for Beirut, where her travels in the East began. She based herself first at the home of James Elroy Flecker in Lebanon and then in Baghdad, where she met the British high commissioner.

By 1931 she had completed three dangerous treks into the wilderness of Iran, in parts of which no Westerner had ever been before, and had located the long-fabled Valleys of the Assassins (hashish-eaters). She traveled among the Kurds in Kurdistan. During the 1930s she penetrated the hinterland of southern Arabia, where only a handful of Western explorers had previously ventured and then never as far or as widely as she went.

During World War II, she joined the British Ministry of Information and contributed to the creation of a propaganda network aimed at persuading Arabs to support the Allies or at least remain neutral. She wrote more than two dozen books based on her travels, almost all of which were published by John Murray in London, with whom she had a successful and long-standing working relationship.

From The Geographical Magazine published in March 1958 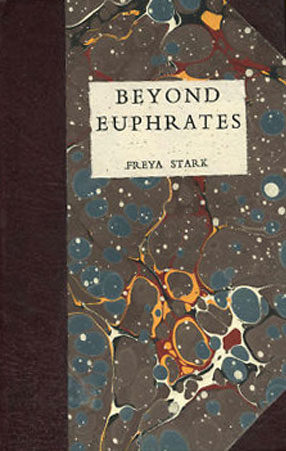 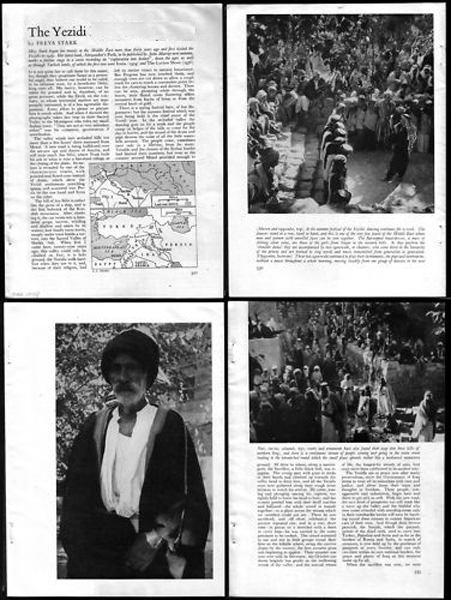 The Yazidi (also Yezidi) are members of an old Kurdish religion with ancient Indo-Iranian roots. They are Kurds and speaking Kurdish living mainly in the Mosul region of southern Kurdistan. Their religion, Yazidism, is seen as a complex of local Kurdish beliefs oriental Sufi doctrine introduced to the area by Sheikh Adi ibn Musafir in the 12th century. The Yazidi believe in God as creator of the world, which he placed under the care of seven holy beings or angels, the chief of whom is Melek Taus, the Peacock Angel.

"Miss Freya Stark (January, 31st 1893 - May, 9th 1993) began her travels in the Middle East more than thirty years ago and first visited the Yezidis in 1929.  Her latest book, Alexander's Path, to be published by John Murray next Autumn (i.e. 1958) marks a further stage in a series recording an "exploration into history", down the ages as well as through Anatolian lands, of which the first two were Ionia and The Lycian Shore."

This illustrated article tells the story, in words and pictures, of the Yezidi people and their chief festival in the holy valley of Sheikh 'Adi in an area of Southern Kurdistan, north of Mosul (an area so much in the news over recent years).

RIDING TO THE TIGRIS - by Freya Stark